Through the tears welling up in my eyes, I looked down at the opening and closing of my hand.

First I wrapped my four right fingers over my thumb and pressed them against the centre of my palm into a fist. I examined it for several seconds, then slowly released the fist until my fingers were outstretched. For a few moments more, I gazed at my open hand, before closing it again.

After several minutes I started to sync the motions with my breath so I inhaled as the fist closed, and exhaled as it opened. With every in breath I silently repeated Ya Qabid (The One Who Constricts), one of the 99 Qualities of Allah, understood as the Divine Reality in the Islamic Sufi tradition.

With each out breath, Ya Basit (The One Who Expands Our Hearts), emerged in a whisper from my lips.

I concentrated on this meditation long after the sobbing had ceased, mesmerized by the incredible workings of the human body. Rumi's poetry frequently references the harmony between expansion and contraction. In a physical sense, it keeps us alive: the rise and fall of our diaphragms brings forth breath and the heart constricts and expands to move blood through our veins.

Finish the article
Posted by Dew at 14:16 No comments:

While reading Omid Safi’s new book, Radical Love: Teachings from the Islamic Mystical Tradition, I was among editors from London’s media outlets attending a briefing on how the British public perceive Muslims, based on research commissioned by the Aziz Foundation. The book was sitting in my purse as we heard some staggering statistics: nearly one in three Brits feel negatively toward Muslims, three times higher than the closest religious group. Among these sceptics, 91% feel more suspicious of Muslims after terror attacks.

The findings were a jarring contrast to the passionate love that drips from the pages of Safi’s collection of poetry from several dozen Muslim mystics, passages from the Quran and sayings of the Prophet Muhammad. I walked out of the meeting with a visceral sense that the Islamic path of Radical Love, or Eshq, is the antidote for neutralizing the violent associations that Islam is readily smeared with in the mainstream imagination. 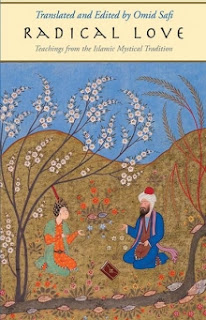 There are, admittedly, many books of sufi love poetry dedicated to the impassioned verses of Rumi, Hafez, Attar and others — my own Mevlevi spiritual teachers have translated stunning compilations of Rumi, in particular.

Safi adds something unique and important for this juncture of human history. He brings together the voices of generations of lovers of God into a single, richly nourishing anthology, translating them anew to take into account modern language, references and sensibilities.

It’s like a tasting menu; the reader gets a generous sampling of morsels of Islamic mystical wisdom drawn from sufis over the centuries. It’s ideal for dipping into for moments of inspiration in our fast-paced, distracting, consumer-driven lives, where spiritual growth is readily sidelined.

I recently accompanied my murshid on a spiritual retreat in Turkey, along with a group of dear friends and seekers. We sat in the presence of sufi teachers and visited shrines, including the House of the Virgin Mary in Ephesus and the tombs of Mevlana Rumi and Shams of Tabriz in Konya.

One of the lessons that resonated with me was the idea that we can relate to prophets and saints like Muhammad, Jesus, Mary, Buddha or Rumi not merely as historical figures, but as sacred personalities who belong to all humanity, rather than a particular religion, ideology or nationality. They represent transcendent qualities accessible through the collective human consciousness.

We open ourselves up to a direct experience with these sacred figures when we bring our lower selves or egos (called nafs in sufi terminology) into alignment with our hearts. In sufism, this is achieved by cultivating consciousness of the Divine Reality, or Allah, through zikr, or remembrance. Over time, such practices heighten our spiritual radar and we grow more and more into our greatest humanness, where direct experiences with the Beloved permeate all circumstances of life.
As Mevlana Rumi says:


Our body is like Mary.
Each of us has a Jesus inside.
If a pain and yearning shows up inside us,
the Jesus of our soul is born.
If there is no pain, no yearning,
the Jesus of our soul will return to its origin from
the same secret passageway he came from…
If there is no pain, no yearning,
we will remain deprived
not benefiting from that Jesus of the soul.
(Translated by Omid Safi, in Radical Love: Teachings from the Islamic Mystical Tradition)

Understanding that prophets and saints reside in the potentiality of every human’s  experience opened a deeper dimension of intimacy and connection for me. It’s also obliterated the cultural and religious divisions that I’d grown up believing separated people.

Finish the article
Posted by Dew at 14:26 No comments:

It’s well after midnight and burning candles flicker in my dimly lit living room. Music hums quietly in the background, a love song carried through the vibrating cry of the reed flute. My head gently sways right to left to Oruç Güvenç’s sweet notes and we sit, me and my Beloved, at the table overlooking the night sky as London fades into a deep sleep. There’s a stillness outside and within.
No words are spoken as I gaze at my Beloved with longing, seeing and thinking of no one but Him. His Names are all around me, in the light of the candle, Ya Nur, the Essence of Luminosity. In the delicious scent of the yellow and pink roses in the vase next to me, Ya Latif, the Subtle One. In the love exploding in my heart, Ya Wadud, the Most Loving One. 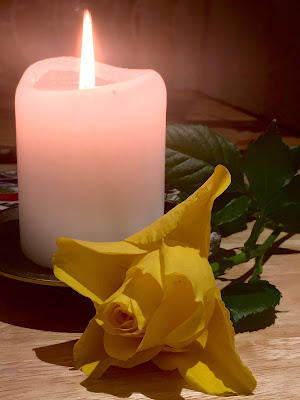 After eating my suhour meal — a boiled egg and a small bowl greek yogurt with acacia honey and chia seeds — we move to the sofa. Not for a moment do I let go of his Handhold, so strong it will never give way.*
Unable to find words to express the depths of my yearning, I open at random pages of poetry drawn from the wells of masters. Who better than them can express the urgings of my heart.

First, from Mevlana Rumi, comes:
The real beloved is that one who is unique,
who is your beginning and your end
When you find that one,
you’ll no longer want anything else
(Masnavi III, 1418-19, translated by Camille and Kabir Helminski)

Then Yunus Emre chimes in:

You fall in love with Truth and begin to cry,

You become holy light inside and out,


And Sheikh Abol-Hasan of Kharaqan offers:

every time He looks there.


I read each verse, aloud or silently, to You, Ya Sami, the One Who Hears All. The goosebumps on my skin and underneath a visceral reminder that You are, as the Quran says, closer to me than my jugular vein.
Finish the article
Posted by Dew at 18:45 2 comments:

My Journey From ‘Moderate’ Muslim to Seeker of Love

For many years starting at around the time of the 9-11 terror attacks, I referred to myself a “moderate Muslim.” I used the term on my Facebook profile and pronounced it if asked about my religious beliefs.

The label was in many ways a reactive disclaimer to popular opinion about Muslims. It meant for me that I was raised in an Arab, Islamic household in the West, I rejected extremism and was tolerant of diversity and multiculturalism. I was an approachable and modern professional who didn’t take religion too seriously. I still felt a deep connection to my inherited identity, albeit with limited critical reflection. I believed in God, fasted during Ramadan and prayed on occasion, but rarely with a deep amount of presence or the Divine at the center of my consciousness.

I suppose the label also insinuated that I wasn’t fully Muslim in the way people perceived Muslims. Becoming “fundamentalist” in following the tenets of the mainstream religion was seen as synonymous with being radicalized. So I didn’t bother.

Several years passed and life, as it does, handed me one setback to negotiate after another. Each of them, slowly but surely, pulled me further and further away from God. I was left questioning what the point of faith, and for that matter life, was at all. Then, just as I was abandoning the religion I’d known my whole life, I had my first encounter with spiritual Islam.

It was almost eight years ago, and the tender sensations that coursed through my veins still induce goose bumps. Unable to sleep, I’d been sitting on my living room floor trying to decipher how to cope with my latest misfortune and understand why I deserved it. Then, in a burst of inspiration, my perception shifted. I saw that what I’d perceived just the moment before as a disappointment was actually a blessing, for it led me to be receptive to the guidance that was unfolding within me.

Finish the article
Posted by Dew at 00:06 No comments:

Dew
Dew, for me, is related to light. It is formed overnight when the air becomes saturated with water vapour, yet its droplets adorning leaves, grass and flowers are observed only once the sunlight shines upon them. It is a beautiful sight and a reminder of the grace of God in creating nature for us to enjoy and understand His miracles. This blog is dedicated to sharing my every-day discoveries of how the light and beauty of Islamic spirituality can be part of a modern, well-rounded way of life.

And if all the trees on earth were pens and the ocean was ink, with seven oceans behind it to add to its supply, yet would not the words of God be exhausted in writing: for God is Exalted in Power, full of Wisdom. (Quran 31.027)